Home / About Us / What Drives Us 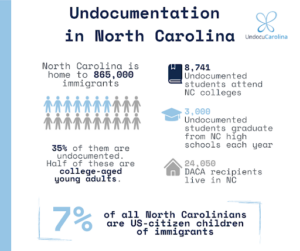 For more than a quarter century North Carolina has led the South as a new immigrant destination. By 2015 immigrants made up 8% of the state population, and an additional 7% were U.S. citizens with at least one immigrant parent. Today over one and a half million people in North Carolina are immigrants or children of immigrants, and issues of immigrant exclusion are of growing concern not only for our campus, but in our communities, neighborhoods, and our state as a whole.

Nearly 150,000 North Carolinians are undocumented, college-aged, young adults. Another 170,000 are U.S. citizen children living with an undocumented family member. Members of the Carolina community touched by undocumentation include students, staff, faculty, alumni, and supporters. Some are undocumented or hold DACA or other precarious immigration statuses. Many others are U.S. citizens who form part of mixed-status families.

At UndocuCarolina we believe all members of our community should have a shot at a quality education like the kind offered here at UNC. But North Carolina’s policies regarding undocumented student access to higher education are some of the most restrictive in the country. 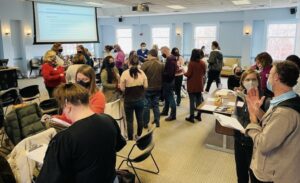 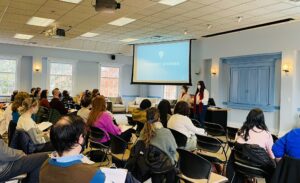